skip to main | skip to sidebar

Intro:
Gel Permeation Chromatography (GPC) is used in this experiment. This process allows molecules to be separated on the basis of their size using a column which contains a special separation matrix. An important consequence of this structure is that other molecules can enter these beads and it is possible to tailor the properties of these gel beads so that only relatively small molecules can enter while larger molecules are excluded.
Changes made to the protocol
# Liquid-liquid extraction was not carried out following the gel permeation chromatography in order to extract cholesterol.
# Detection of reducing sugars was not carried out using Benedict’s reagent. Another type of reagent was used that turned red/pink in the presence of reducing sugars.
# 1ml fractions were collected from the GPC instead of 2ml.

From the result we understand the small molecules such as glucose in this case is able to enter the beads and hence become partially trapped and passes in between.
The overall understanding we get is that the large molecules went through the beads
more faster in comparison with small molecules. Using this known fact protein and the glucose became separated and purified.

From the figures we understand the protein is seen in fraction 3, it is at its peak
concentration at fraction 5 & 4. It overlaps with the glucose in fractions 5&6. We can see further on in the fraction that the concentration is decreases.
Posted by Biochem champ at 7:48 AM 40 comments: 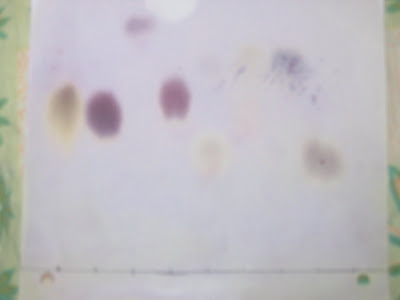 Egg yolk contains trioleine, cholesterol palmitate and phosphatidylethonolamine, The most polar of the three elements is the second element. It hardly moves up the TLC because of the presence of several polar groups; phosphate groups, amine groups and several oxygens , and cholesterol palmitate being the most non polar.
Posted by Biochem champ at 7:06 AM 3 comments:

Investigating the Chemical Properties of Sugars

Intro:
The aim of this practical was to work with several different sugars and a solution called Benedicts' reagent. We see how sugars react as reducing agents.
Test Tube Solution Colour
Result:

Aldaydes have a carboxyl group + function group + hydrogen.
Ketones have a carboxyl group + functional group.
Fructose and glucose are reduceing sugars, monosaccharides and therefore a reaction takes place the solution turns brick red after it has been heated.
Lactose and sucrose are disaccharides and therefore no reaction takes place so the solutions remain blue brown
Posted by Biochem champ at 6:41 AM 1 comment:

Identification of the sequence of Polypeptide

Intro:
The aim of this practical was to see the difference between amino acids by determining the sequence of a particular dipeptide. Peptides are essential in building blocks for proteins. Amongst various type of peptides there are few which share a common core structure such as only differs by side chains i.e hydrophobic or amino acids. Differences in the chemical properties caused by the different side chains provides the way in which we can seperate the different amino acids from each other. In this practical the different amino acids are determined by the sequence of a particular dipeptide. We used paper chromatography to identify the component peptides you use standard anino acids.
Method:
Is given in the protocol
Precaution and changes:
Chemical Ninhydrin which will react with proteins to form long lasting colour.
step 6 was left out.
Results:
From the results the seperation is visible. The hydrolised sample amino acids in the dipeptide break the double bond causing seperation of the amino acid.
Posted by Biochem champ at 6:25 AM 1 comment:

The aim of this experiment was to determine the relative solubility of a group of molecules. We examine the polarity of given molecules and understand the basic knowledge behaviour of large molecular complexes. 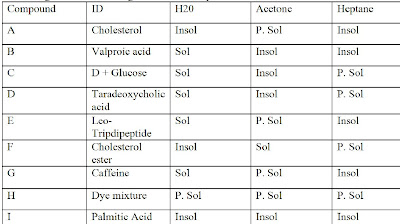 Different molecules have different molecular structures and due to this some are hydrophobic, hydrophilic and amphipathic. As shown in the results for instance cholesterol is insol in H20, P. Sol in Acetone and Insol Heptane. This indicates that the molecular structure is formed in a way that it is very insoluble, which can be used to play a major role in biochemistry. We understand more polar groups a molecule has the more soluble it is, and the more non polar the less soluble it is.
Posted by Biochem champ at 6:59 AM 1 comment: